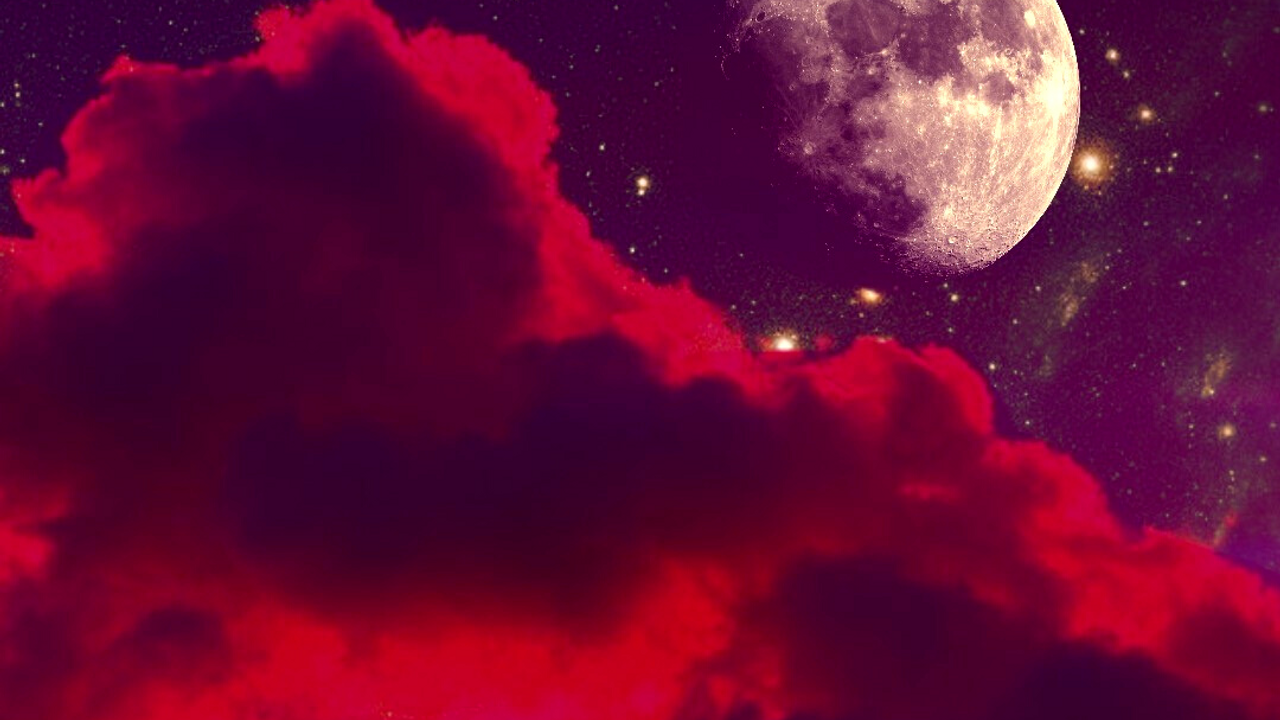 Things start to HEAT UP in April with the Sun, Venus and Mercury transiting the fiery and willful sign of Aries AND activating the disruptive influence Uranus-in-Taurus later in the month! The first half of this month is great for getting setting new projects into motion and for hitting the ground running, while the second half of the month is GREAT for making big changes to areas of your life that have remained stagnant for far too long. Some of the energy is a bit challenging with the year-long Saturn square to Uranus activating the potential for frustrations, unanticipated challenges, and the need to pivot and make slow and sustainable adjustments to our plans, BUT it’s nothing we haven’t dealt with before AND it’s much less intensified than what we experienced earlier this year. 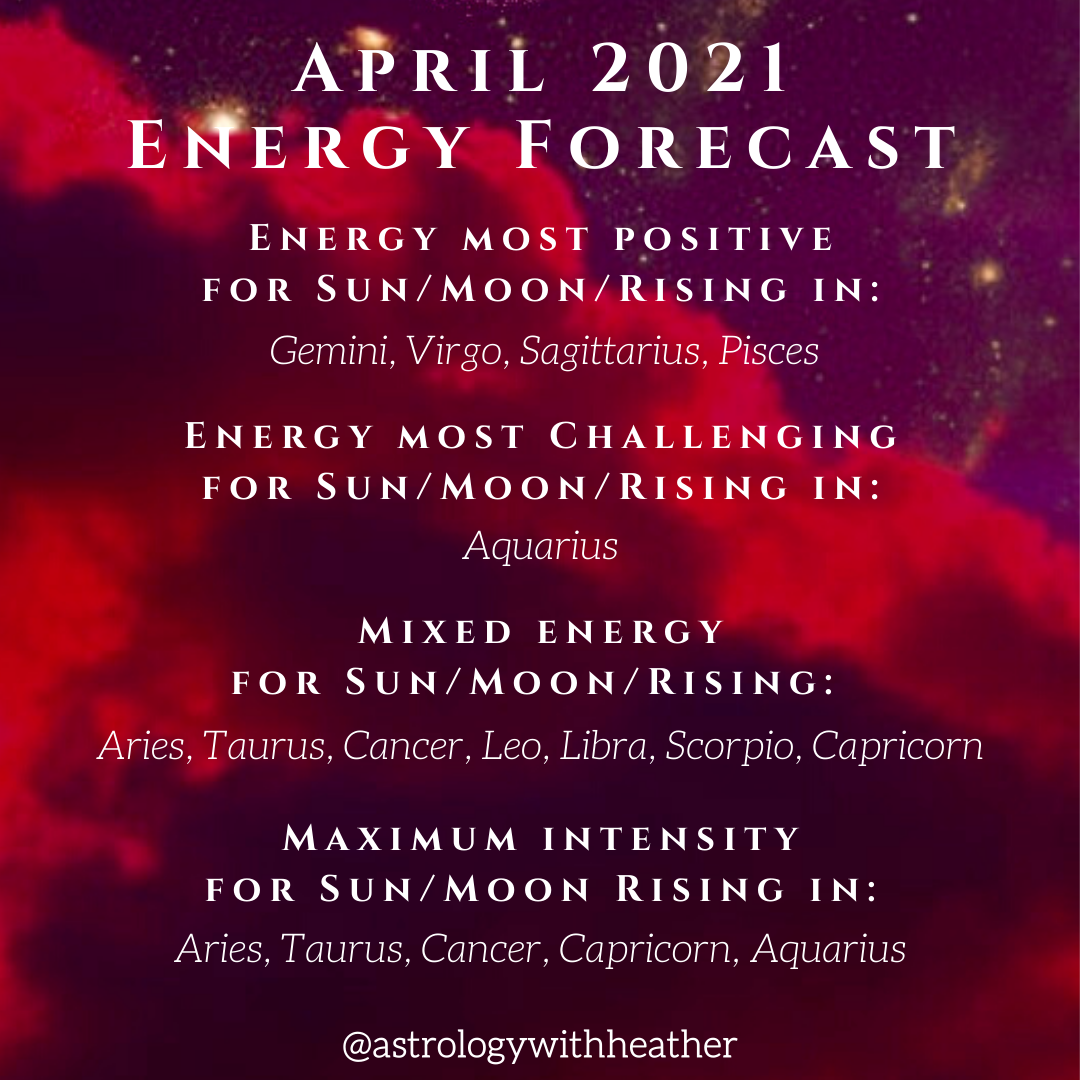 Energy most positive for Sun/Moon/Rising in: Gemini, Virgo, Sagittarius, Pisces

Energy most challenging for Sun/Moon/Rising in: Aquarius 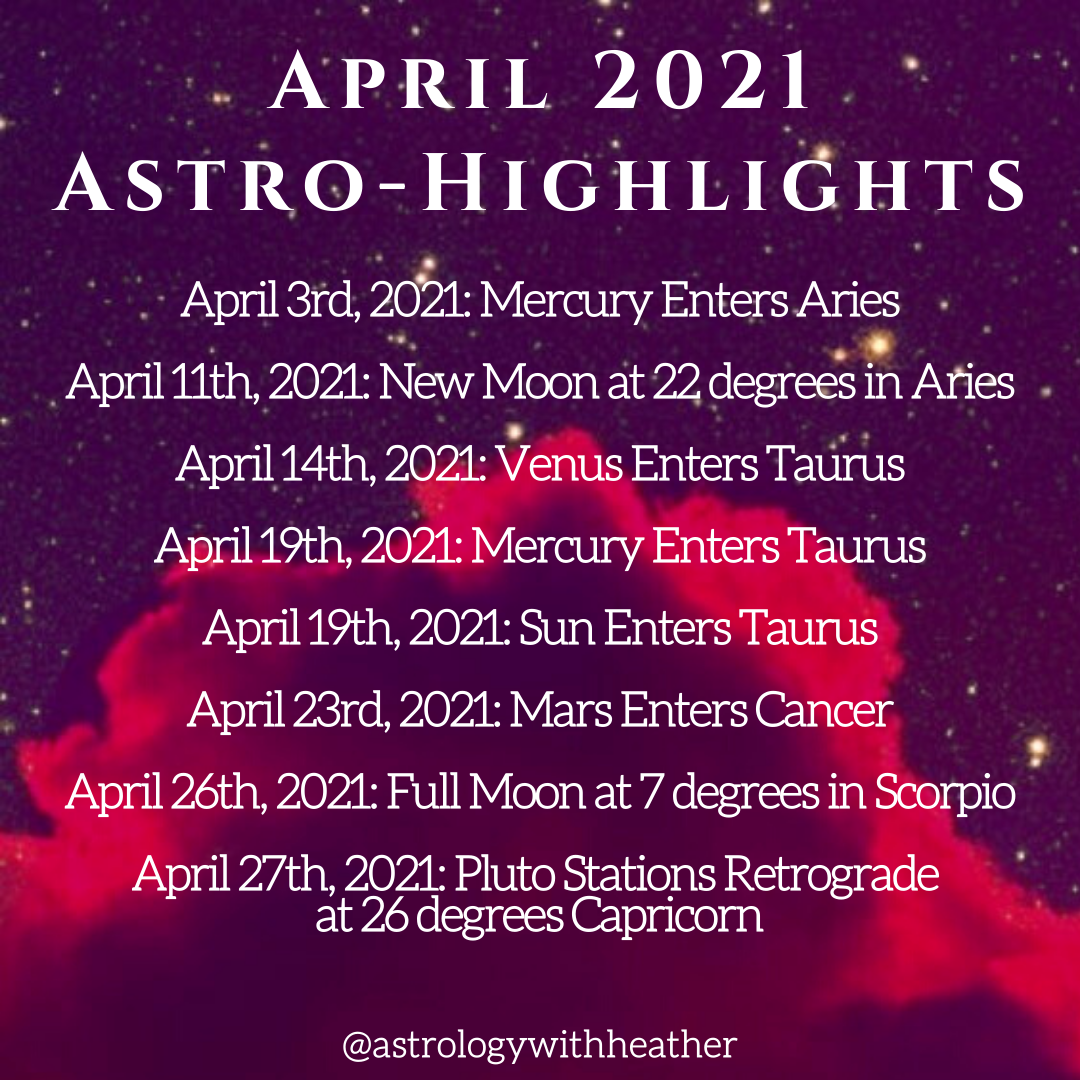 When Mercury transits Aries, our language becomes more deliberate, edgy and straight-forward. While we can have a much easier time asserting our own needs (“I want” becomes a more commonly used phrase during this transit), we can also have a more difficult time truly listening to the needs and concerns of others. This energy brings passion and urgency to our speech, causing us to raise our voices, become much more energized in our delivery, and speed up our words to match the faster pace of our thoughts! On the flip side, we can come across as much more demanding, harsh and abrasive under this influence (and we’re likely to see this come out, as always, in the collective energies through what shows up in the media).

Word to the wise: take your time and pay closer attention to the way you deliver information over these next two weeks. After you’ve spoken your piece, take another moment to stop, listen, and reflect on the feedback you receive from others BEFORE you respond. Many conflicts can be avoided during Mercury’s transit through Aries by slowing down a bit and doing these two, very simple, things.

NEW MOON AT 22 DEGREES IN ARIES

This New Moon is an interesting one—the Sun and Moon conjoining in the self-serving and willful sign of Aries will be conjunct Venus, planet of relationships and reciprocity, as well as Ceres, the asteroid that represents nurturing and sustenance. The way these somewhat conflicting energies will play out together will be interesting, to say the least!

The first New Moon of the Astrological New Year is always a big one, especially when it falls in the first sign of the Zodiac (every so often it will fall in Taurus, which is a different story entirely). The New Moon in Aries brings a MAJOR boost in passion and energy catalyzing powerful new beginnings! With this New Moon falling in a challenging square to Pluto in Capricorn, we may become obsessed with forging our way on the new path we’re creating—sometimes at the expense our sanity, self-care and our relationships with others.

Mars and Jupiter are in the mix making supportive sextile aspects to the New Moon, amping up our enthusiasm and determination even further! While these positive influences will help to protect us from TRULY going overboard, that square to Pluto is still likely to be problematic. Avoid getting too fixated on controlling the outcome of your endeavors and doing things YOUR way. There are many paths that lead to the outcome you desire, and many of them can help you to cultivate success without bulldozing over others or burning yourself out.

Venus finally comes home to Taurus this month, getting closer and closer to becoming “reborn” again as the Evening Star after being “combust” and debilitated in conjunction with the Sun for quite some time. Venus in the sign of Taurus favors pleasure, beauty and luxury! Now is the time to full engage in the sensory experience—rich foods, breathtaking scenery, soft, sensuous fabrics and leisure time with your loved ones are what Venus in Taurus is all about!

For this particular Venus transit through its home sign, Venus will come into a conjunction with the disruptive and liberating energy of Uranus in Taurus on April 22nd. This portion of the Venus-in-Taurus transit is not quite as cozy as Uranus demands that we stretch far beyond our comfort zones to make important changes to free ourselves from stuck, stagnant, monotonous energies we’ve been holding on to for far too long. This could be in the form of hoarding material possessions that weigh us down and have no real, practical value or holding onto a job or a relationship that restricts us from reaching our full potential simply because it feels familiar and safe.

When Mercury moves into Taurus, our thoughts begin to slow down—way down, BUT this certainly isn’t a bad thing! Mercury in Taurus has a beautiful way of simplifying otherwise complicated information and articulating it in a way that’s almost poetic (leave it to a Mercury in Taurus native to turn something that’s otherwise mundane into a thoughtful and elegant tale with a very practical message underlying the entire speech!). Now is a time when we will be less likely to clutter our minds and our emails with excess information—Mercury in Taurus is exceptionally thoughtful and compels us to only say what’s truly necessary!

On the flip side, Mercury will be conjunct Uranus pretty shortly after entering the most grounded sign of the Zodiac, which will can be a particularly animated and unusual energy on a mental level! Mercury conjunct Uranus brings flashes of insight and inspires ideas that are truly ingenious! This energy will have our minds and nervous systems racing around the 24th of April, if only for a moment, causing us to think WAY outside of the box when it comes to finding new, innovative solutions to old problems.

The Sun in Taurus is a beautiful time here in the Northern Hemisphere (although I’m sure it’s equally beautiful south of the equator, in an entirely different way)! Taurus season is one of my favorites by far! Taurus season lands us into mid-Spring when the earth becomes green, colorful and lively again as seeds begin to sprout and flowers begin to bloom—very Venusian indeed!

This particular Taurus season will be triggering the same conjunction to Uranus we’ve been experiencing since the middle of this month, occurring exact on April 30th. Not only does this highlight the absolute NEED to branch out of our comfort zones to embrace the change we’re so desperately craving deep down inside BUT, it also triggers Saturn’s square to Uranus, requiring that we cultivate change the RIGHT way, rather than the fast way.

Mars is at its “fall” in Cancer, meaning that the planet of action, aggression and strength doesn’t operate very effectively in this sign. With Mars in Cancer, our expression of will may be inhibited (or enhanced) by our in-the-moment emotional state. That means when we’re into something, we’re REALLY into it, and when we’re not, there’s absolutely nothing that will get us to budge… until mere moments later, that is, when something else comes along to shift and lighten the mood!

Cancer is a sign that’s known for approaching things in a way that’s more indirect (think of a crab, moving side-to-side rather than charging forward along a sandy beach). With Mars in Cancer, the expression of anger can be inhibited through preference to a more indirect approach—Mars in Cancer natives are well-known for their passive-aggressive tendencies when they’re feeling hurt, mistreated or enraged. That being said, when something or someone you hold dear is truly threatened, Mars in Cancer will insure that you come to their defense and that you do it with passion and the type of strength that only comes through channeling deep and intense emotion!

This month’s Full Moon is technically at its “fall” in the passionate and protective sign of Scorpio making some rather challenging aspects with Saturn in Aquarius and this month’s stellium in Taurus, BUT with the beautiful trine the Moon will be making to Mars, there’s hope for us yet!

Let’s start with the good news: The Moon in Scorpio in trine with Mars in Cancer insures that we’ll put our passion and emotion behind EVERYTHING we do, without holding back! That being said, there’s a storm brewing between the Sun, Uranus, Venus and Mercury in Taurus on the other end, triggering the year-long square between Uranus and Saturn. This is BIG energy, ripe for disruption and challenge that, while frustrating in the moment, lead to long-term liberation and much needed change!

This Full Moon may have an unsettled feel to it, with our emotions running on overdrive while the Mars energy in the mix gives us the ability to channel this positively, we have to be LASER FOCUSED on doing so in order to harness it. There will be many distractions in terms of both outside events and internal anxieties. If this energy feels overwhelming to you on a personal level, just know that it will pass!

Whenever Pluto stations retrograde, intensity is amplified—especially for all of my Pluto-ruled Scorpio rising readers out there! If you’re someone who’s being hit particularly hard by this alignment, the energy can be quite internally triggering and externally catalyzing. Now is a time to pay close attention to anything toxic that’s coming up to the surface for you to PURGE from your life once-and-for-all. It’s also a time to check in with how you’re feeling—are old fears and anxieties bubbling back up in unexpected ways? Are you being called to move past old traumas, jealousies, or resentments? If so, now is a POWERFUL time for the deepest forms of healing.