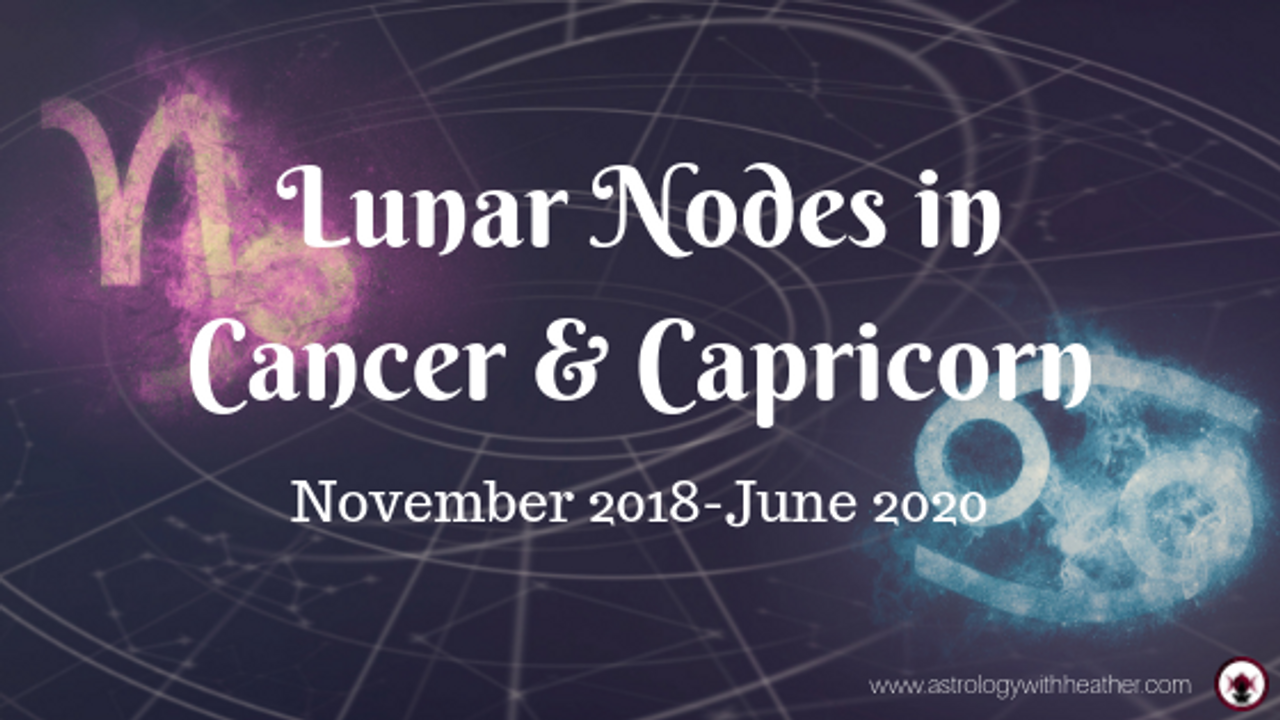 The Nodes Are Changing Signs, Bringing Karmic Endings and New Beginnings for Us All!

WHAT ARE THE LUNAR NODES?

The lunar nodes are calculations that are primarily made to track and predict the eclipses, and in astrology these points in the chart have a special, karmic significance. In Western, tropical astrology, these karmic points are referred to as the North & South Nodes. In Vedic astrology the nodes are known as Rahu and Ketu, representing the head and the tail of the dragon. In reference to the birth chart, the North Node represents the path we are headed into in this lifetime while the South Node represents the path we are moving away from, as this is an area in the chart that we have already mastered in previous lifetimes. Rahu, as the dragon’s head, shows us where we go to gain nourishment, while Ketu, as the dragon’s tail, shows us where we need to surrender and let go. When we nourish the North Node by engaging with its energy, we provide fertilizer for beautiful things to grow in the South Node area of our charts. The ultimate goal is to integrate and find balance between the energy of these two points in the chart.

The transiting North Node brings fated growth and new opportunities in the area of life represented by the sign it is moving through—and it will be transiting through the nurturing, feminine sign of Cancer from November 7th, 2018 until June 5th, 2020. It is also important to note that because we are dealing with the eclipse points, we may not be able to clearly see the events that unfold due to the influence of the nodes as important information may remain “eclipsed” and outside of our conscious awareness until later on down the line, often producing unexpected long-term results. In Cancer, women, families, motherhood, the home, real estate will all become a focal point of new growth and we will be embarking on a new, collectively fated path as it relates to these themes. The north node in Cancer will also enhance our collective desire to seek emotional and physical safety, security and comfort.   On the opposite end of the spectrum, we’ll be dealing with a karmic unraveling of the collective Capricornian structures with the south node transiting through this Saturn ruled sign. For the next 18 months, on both a global and individual level we’ll be releasing attachments to rigid structures, rules, and responsibilities. Capricornian institutions such as government, corporations, and the Saturnian “corporatocracy” will come under huge amounts of scrutiny, ultimately leading us to surrender our collective attachments to old, outdated ways of dealing with this energy.

QUICK REFERENCE AND GENERAL OVERVIEW OF LUNAR NODES IN CANCER/CAPRICORN FOR EACH RISING SIGN/HOUSE.

With the North Node transiting your 4th house, now is an ideal time to lay down roots. Endeavors involving the home, real estate, family, and emotional security are all favored throughout the next 18 months. Now is a time when you may be called to let go of something regarding to your career and refusing to relinquish control can result in your public reputation taking a bit of a hit. This doesn’t mean that you can’t continue to work or maintain career success and status; it just means that you must make sure your family affairs are in order first and foremost. This transit marks a period of time when worldly ambitions take a back seat in favor of deepening comfort, emotional stability and connection to family.

With the North Node transiting your 3rd house, it’s all about communication. Now is a time to put plans into action. If you work in the field of marketing or communication, or if you own your own business, the next eighteen months will provide ample opportunity to communicate more creatively and forge stronger connections with your audience and your community. Over-philosophizing your approach can lead to a rigid delusion of moral-superiority which alienates those you aim to connect with on an emotional level. Sticking to the facts, communicating your intentions very clearly and coming from a place of empathy and emotional connectedness is the aim of the game.

With the North Node transiting your 2nd house, now is an excellent time to focus on accumulating resources and material wealth; however, with the South Node transiting your 8th house, be careful to insure those resources are not obtained at another’s expense. Now is a time to earn the comfort and security you desire through your own effort and hard work, and to do so intuitively. If you’ve been struggling with debt, these next eighteen months provide an opportunity to release all ties to rigid Capricornian entities who hold financial power over you. Now is not the time to borrow money from others as doing so can bog you down and prevent you from enjoying the material pleasures you so strongly desire.

With the North Node moving into your sign, these next 18 months are all about YOU. Now is the time to start focusing on your own needs and self-interest, and to let go of caring so much about what other people think about what you’re doing. The South Node may require you to let go of attachments to certain responsibilities in relationships, but if this is the case just know that you are making space for fated (and strangely familiar) new connections to come into your life.

With the North Node in your 12th house, fated events may pull you away from the busy-ness of everyday life and into a space of solitude, contemplation and rest. These next eighteen months are an ideal time to escape from reality to go inward. Opportunities to escape the day-to-day hustle may present themselves and can provide exciting new opportunities to connect with deep forms of creativity and enhance your intuition. This transit favors deep, introspective work over external, work-related activities.

With the North Node transiting your 11th house, these next eighteen months mark a time when you’ll be called to socialize and develop new friendships. The key here is to merge with group consciousness in a way that feels comfortable and nurturing. Fated, familiar-feeling connections to new friends and social networks may show up to assist you in moving into a new path. This energy favors nurturing the group over focusing your own hobbies, passions, and romantic life, as well as letting go of old, rigid parameters placed around your creativity and play time.

Moving forward (or maybe a bit sideways, with the North Node in Cancer) into a fated new direction when it comes to your career and public reputation, all the while letting go of past karma that’s holding you back in the area of your home, family, property and ancestral lineage. The North Node in your 10th house can have you exploring new career paths or diving even deeper into the path you have already chosen. Too much focus on the home, family, and real estate dealings can bog you down and prevent you from making the connections needed to further your career growth.

The North Node in Cancer has you moving into fated and uncharted territory when it comes to your philosophical, religious and moral belief systems. These next 18 months will be an excellent time to embark on an exciting new journey of both internal and external discovery. Don’t allow yourself to be bogged down by the “busy-ness” of mundane, routine communications and let go of old, rigid patterns of thinking to make space for these new developments in your life.

The North Node moving into your 8th house will bring fated, transformative new developments in the area of deep healing, self-empowerment and other people’s finances, but there’s a need to let go of some attachment to material possessions (or your need to work hard for them) in order for this to occur. For some, this transit could bring financial turbulence, for others a financial windfall, and for the rest, something somewhere in between.

Now is a time when you will gravitate more toward partnerships, romantic and otherwise. Going it alone may feel safe and comfortable, but now is not the time to focus solely on oneself and the pull toward relationships and marriage may feel overpowering. For those who are already in a committed long-term relationship, now may be a time when you’re pulled more deeply into partnership. If the relationship is meant to be, this transit may bring more romance, fun and intimacy. If the relationship is a bit stale or simply isn’t right, you may catch yourself looking for a sense of security and emotional connection elsewhere. Whatever the situation may be, take care to account for the needs of the people you care for most in your life and work on expressing your love and appreciation in a more nurturing way.

With the North Node transiting your 6th house, now is the time nurture your daily health and work routines. Shying away from work in favor of solitude and spiritual discipline is not advisable at this time and may very well be self-destructive. Over these next 18 months, you will undergo a process of releasing the tendency to retreat into rigid, subconscious patterns. Physical healing can come about as a result of emotional work and more gentle and supportive daily health habits. The North Node’s transit through the 6th house is all about diving headfirst into our daily routines that make up the bigger picture in pursuit of our long-term career goals. It’s about the day-to-day efforts we put in, but pace yourself and try not to become overwhelmed by doing too much all at once.

With the North Node in Cancer transiting your 5th house, you’ll be pulled into a new path when it comes to nurturing your inner child. Externally, there can be exciting, fated new developments involving children, romance and play. Focusing too much energy on the rigid, limiting opinions of your friends and networks will bog you down and prevent you from developing your creative gifts. You may find that you’re cutting cords when it come to old, burdensome friendships all the while new, fated (and oddly familiar) connections are funneling into your life.

Eclipses in Transit Transiting Eclipses can bring wonderful (and fated) gifts, but do be aware that projects, relationships, and events initiated within 3 days of an eclipse almost never turn out the way you believe they will. There will typically be a lot a turbulence surrounding such events, but the end result will ultimately be what you need so long as you are able to surrender any expectations and let go of the need for control.

Occur when the Sun and Moon are in opposition (Full Moon) and in conjunction with the North and South Nodes. These types of eclipses represent a culmination point and a coming back into balance between the two areas of the chart being impacted. The general energy and impact of a Lunar Eclipse is strongest as a Total Lunar Eclipse, aka Blood Moon. Living in a location where the eclipse is visible (occurring at night in your location) also increases the influence.

January 21st, 2019: Total Lunar Eclipse at 0’49” in Leo: The total phase of this total lunar eclipse will be visible from North and South America, and western parts of Europe and Africa. Central and eastern Africa, Europe, and Asia will see a partial eclipse of the Moon.

This total solar eclipse will be visible from small parts of Chile and Argentina just before sunset. Some regions in the Pacific and in South America, including locations in Ecuador, Brazil, Uruguay, and Paraguay will see a partial solar eclipse.

This eclipse will be visible throughout much of Europe, Much of Asia, Australia, Africa, South/East North America, South America, Pacific, Atlantic, Indian Ocean, Antarctica.

Eclipse will be visible East in Europe, Much of Asia, North/West Australia, East in Africa, Pacific, Indian Ocean.