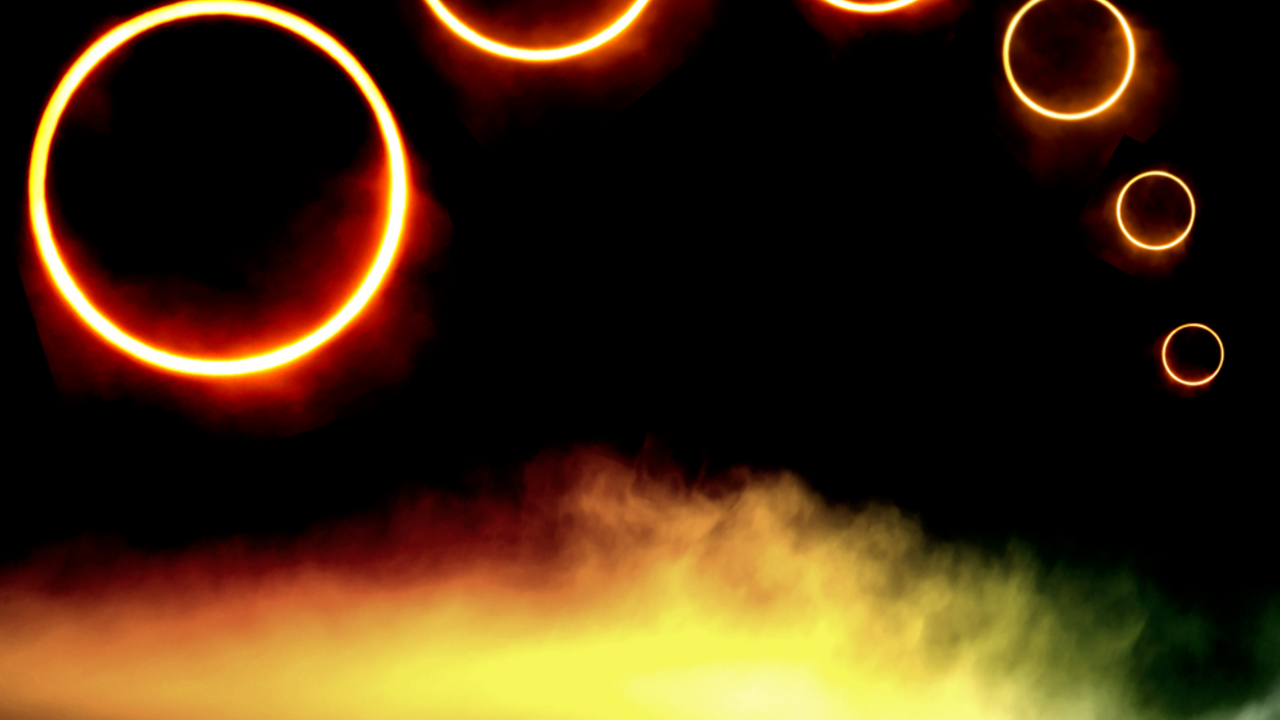 This month we have a hugely impactful Annular Solar Eclipse in Gemini in an exact conjunction with retrograde Mercury! Ideas, information, and communications from the past can come back around to be burned away OR propel us forward into a fated new path more aligned with our destiny! Uranus squares Saturn EXACT mid-month and this is a BIG DEAL! For some of us, this opportunity will provide enough friction and frustration to propel us into working toward the change we so desperately need and, for others, challenges will come along that force our hand and cause us to pivot. Mercury is still retrograde until June 22nd and, although its backing away from it’s disorienting square with foggy and confusing Neptune later in the month, we will have to revisit our ambivalence and indecisiveness around an important decision on last time as we move into the end of June/start of July. 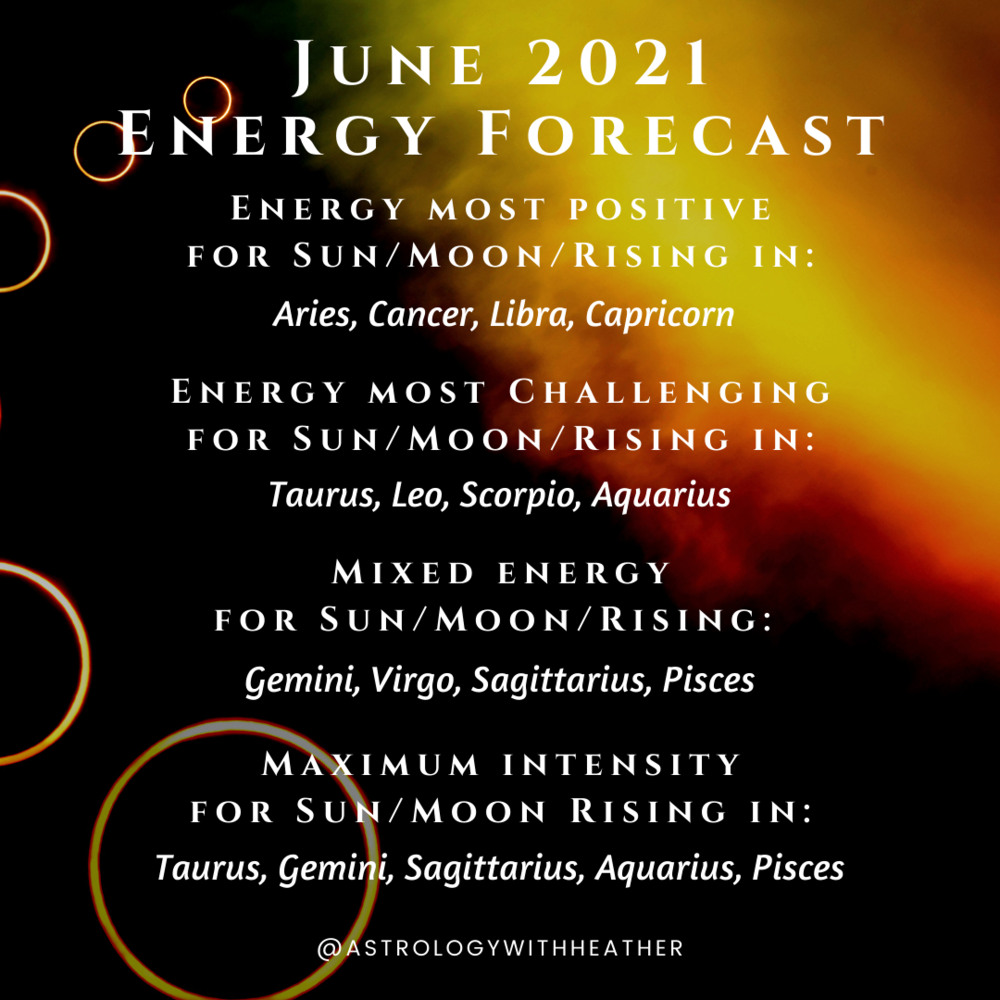 Energy most positive for Sun/Moon/Rising in: Aries, Cancer, Libra, Capricorn 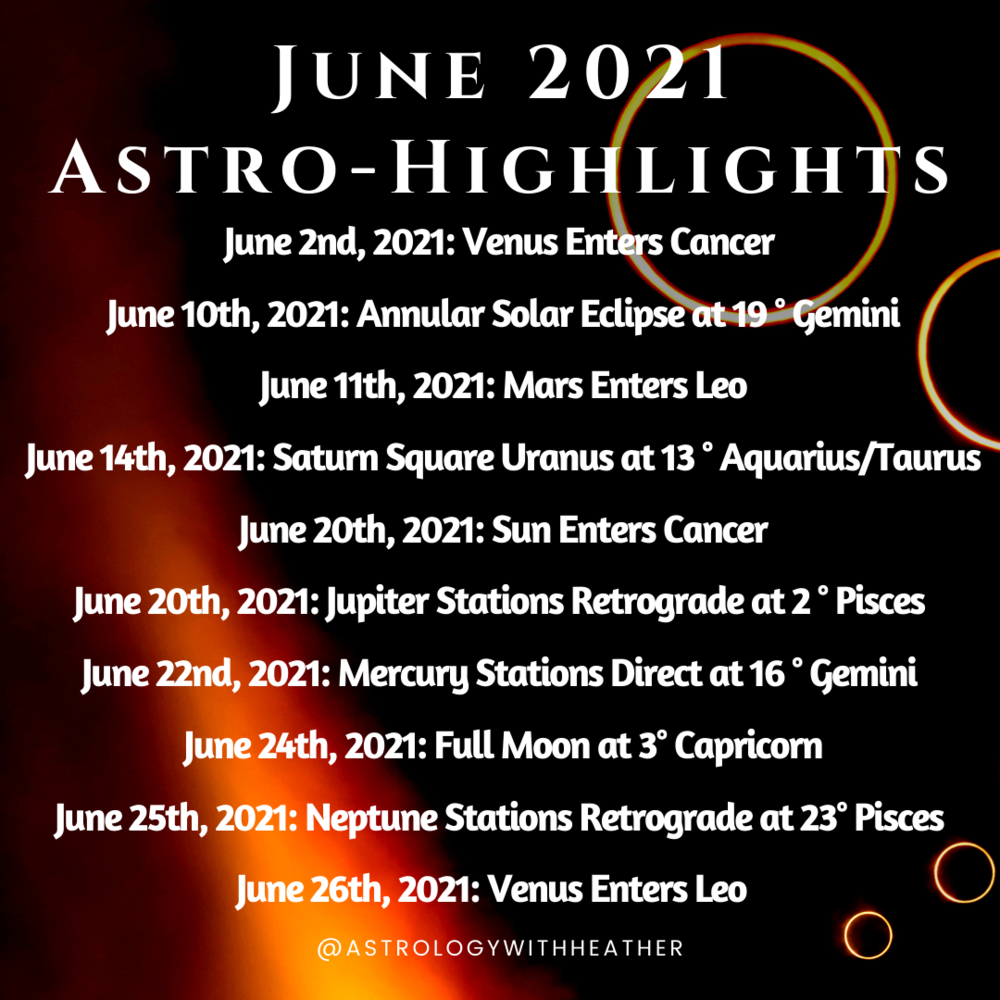 Venus in Cancer is a beautiful placement for forming deep, emotional bonds and cultivating supportive, nurturing relationships. When Venus is in Cancer, people gravitate toward feel-good activities, finding pleasure in comfortable connections and emotionally indulgent activities. This is a great energy for everything from creativity and the arts to gathering with the people you love most for a nourishing home-cooked meal.

The New Moon and Annular Solar Eclipse in Gemini is destined to be LIFE-CHANGING for many people! In a conjunction with Mercury, which WILL be cazimi later today, but is COMBUST at the time of the eclipse—anxieties may be high, information may be delivered in a way that’s less-than-tactful AND less-than truthful in square with Mercury and there is likely to be a LOT of strange information floating around. At the time of the dark moon, don’t believe everything you hear and don’t hold on too closely to your own personal narrative about what’s happening in your own life. There’s important information that’s currently hidden in the shadows or an event that may transpire in the future that is likely to dramatically change your opinion and alter your course of action.

As always, eclipses activate energies in our lives that lead us into our true purpose in this lifetime. As a strong Solar Eclipse with the North Node in the mix, many of us are likely to embark on a BRAND NEW PATH more aligned with our destiny! This new path may feel uncertain, with lots of fogginess and ambivalence around both the outcome AND the journey to get to where we’re fated to go. Surrender control, trust in the process, pay attention to your intuition, the signs and the synchronicities AND the literal messages that come through—this is by far the best way to navigate this eclipse!

Mars in the flamboyant, lively sign of Leo is actually pretty happy here! Mars in Leo stimulates the need to take incredibly bold, genuine action in pursuit of whatever it is we wish to initiate! For the most part, Mars in Leo compels us to act creatively on the things in life we’re authentically passionate about, however; sometimes with Mars in Leo the actions we take and the way we exercise our will can simply be attention-seeking and performative.

For this particular transit of Mars in the playful and gregarious sign of Leo, the Malefic planet of anger, disputes and separation will be making a VERY heated and challenging T-Square with Saturn and Uranus toward the end of this month and start of July—further activating an already amped up year-long energy reaching its second peak. This energy is TURBULENT to say the least. People will be making very rash, impulsive decisions and changing things on a dime, only to leave a giant mess of discordant energy in their wake. Tread lightly during this time.

The second of three passes of Saturn square Uranus is happening NOW! This year-long influence first came exact in February of this year. Thinking back to January-March and biggest frustrations, road-blocks, and changes occurring on your life during this time can give important clues as to what’s coming back around to be revisited this summer. New challenges may come up related to the original themes causing us to have to pivot, change our minds, and make long-term adjustments to our plans in order to set the RIGHT foundation for our future. Setting limitations and boundaries in the present in order to create more freedom in the future is favored throughout this entire year. Many of us will find ourselves coming up against road blocks, shifting, shifting again, pivoting to the left, taking two steps forward, three steps backward, and walking in circles before we realign with the proper path to get us to our destination.

The Sun’s ingress into Cancer marks the Summer Solstice here in the Northern Hemisphere (Winter Solstice for those of you below the equator) and is a potent time for culmination, celebration, and enjoying time spent together with the people you care about most. This particular solstice and Sun-in-Cancer transit is imbued with extra positivity with the Sun in a harmonious and auspicious trine with Jupiter in Pisces (most active June 20th-26th). With Jupiter, the “Great Benefic,” also stationing and sitting strong in the skies it seems like we’re in for a double dose of optimism and enthusiasm that will be greatly needed to mitigate some of the more turbulent energies that are so prevalent this month.

Jupiter’s stationing retrograde and will soon be moving out of its home sign of Pisces and back into the enigmatic sign of Aquarius at the end of July—allowing us to re-visit the opportunities for growth and good fortune we may have missed the first time around from December 2020 through May of this year.

When Jupiter moves retrograde, the growth we experience is far more internalized than externalized—meaning that we gain wisdom, understanding and grow in our integrity more so than our wealth or material abundance. Jupiter retrograde, when it moves back into Aquarius, asks us to reflect on whether or not the opportunities coming back around are to be taken advantage of for the good of all concerned, and not just for selfish gain. This transit also provides opportunity to reflect on where we’ve been operating outside of our integrity or have needlessly given away our personal freedom in favor of what the “hive mind” believes is best.

Mercury’s stationing to go direct in this peculiar zone right in between a conjunction to the North Node and its ongoing square to Neptune—even though this particular Mercury station isn’t overwhelmingly intense it is going to feel a bit… odd, to say the least. When Mercury moves direct we’re finally able to get some momentum going with the plans, projects, communications and ideas we’ve been re-visiting, re-thinking, and revising over the last three weeks BUT we’re not out of the woods just yet, so hold off on signing on that dotted line if possible!

Mercury will make its final square to Neptune in Pisces on July 6th and won’t be completely out of this influence until mid-July. The same rules we’ve been talking about since mid-May still apply—don’t believe everything you hear, be wary of offers that sound too good to be true, and be sure OVER-communicate and double check that you’re WELL-understood so that you’re not MISS-understood.

Today’s Full Moon in Capricorn brings us to the culminate point of our current eclipse cycle! Even though it’s in its detriment and somewhat inhibitied, this Full Moon still has a lot of positivity to offer us. This New Moon in Capricorn literally allows us to put our feet back on solid ground for the first time in WEEKS! The Full Moon in the grounded and pragmatic sign of structure and routine will act to help us get back into the swing of things after all of the intense re-arranging, transformation and changes in direction we’ve been attempting to navigate. The big, bright Capricorn Moon will illuminate the most SOLID path to help us finally move forward into our destiny—and for the first time in a while, this will be the path of LEAST resistance.

This Full Moon in Capricorn reaches it’s point of illumination in a harmonious sextile with Jupiter, bringing in new opportunity for growth as a result of the efforts we’ve been putting in toward physical, material projects over these last two weeks AND the last six months since we set our intentions at the New Moon in Capricorn back in December 2020!

While this energy does offer some reprieve, we’re still in the midst of some rather intense energy that lasts until AT LEAST the middle of July—enjoy the influence while it lasts and don’t miss the opportunity to harness this moment of stability while it’s still here!

When Neptune moves retrograde, our psychic sensitivities become enhanced in ways that are very subtle, yet very POWERFUL! The division between realms and dimensions becomes a little thinner when Neptune goes retrograde, especially within a week of its station. Paranormal happenings may increase in frequency, hidden messages in our dreams may become more clear, and our meditations and flow states may become more fruitful in their ability to help us “tune in.”

With Venus in Leo, our love language leans more toward grand romantic gestures than it normally would—think rom-com acts of love! That being said, this particular Venus-in-Leo transit isn’t likely to be as playful and flirtatious as it could be. Shortly after Venus moves into the generous and heart-centered sign of Leo, it will begin to activate the T-Square between Mars, Saturn and Uranus. This energy is ripe with discord, arguments, separations, challenges and disputes in relationships, agreements, negotiations, beauty and material matters. If your goal is to bring people together and to create a feel-good sense of harmony and joy—it’s best to hold off until after this energy passes.